We will be requiring advance reservations during peak times in order to avoid congestion and optimize the viewing experience for all visitors to the Kiyotsu Gorge Tunnel.
Should you plan your visit during the dates listed below, please be sure to make advance reservations

After an incident involving falling rocks in 1988, the Kiyotsu Gorge valley was closed to the public. The Kiyotsu Gorge Tunnel was opened in October 1996 to make it possible for visitors to enjoy the magnificent natural beauty of the area in a safer and more secure way. The structure was restored in 2018 for the Echigo Tsumari Art Trienniale as an artwork called “Tunnel of Light” by Ma Yansong / MAD Architects.

The tunnel is 750 meters long in total. From the three viewing locations along the tunnel as well as the Panorama Station at its end, visitors can take in the fantastic beauty of the gorge. You can really take in the scenery here. The most impressive spot here is the panorama station at the end of the tunnel, where the scenery is mirrored back on a reflecting pool in a beautiful art space. There are also delightful exhibits throughout the tunnel for visitors to enjoy which provide information on the gorge’s seasons, plant and animal life, and how it came to be formed. 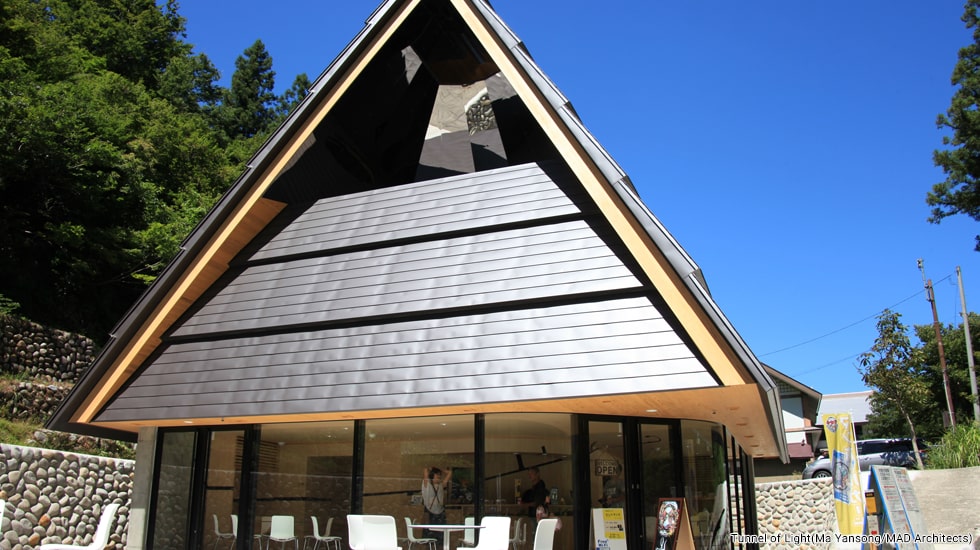 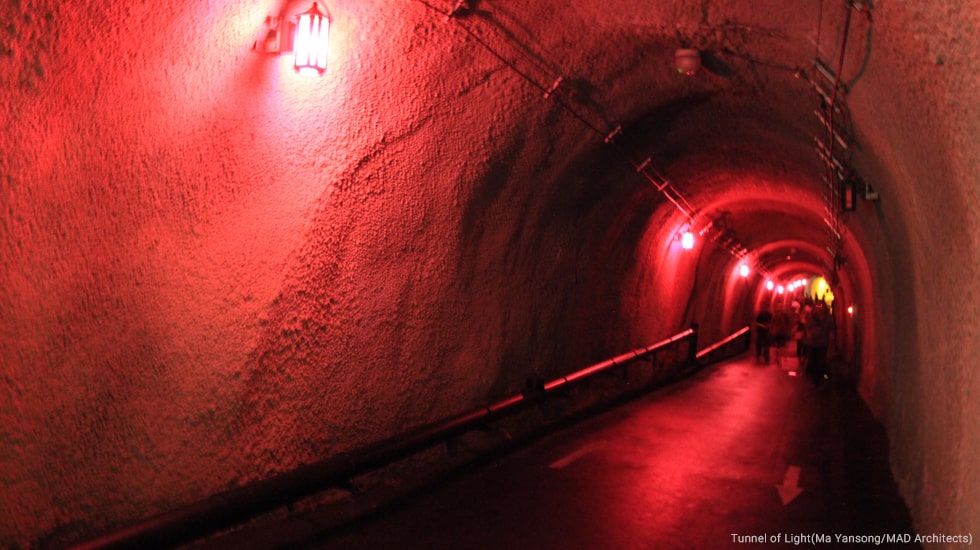 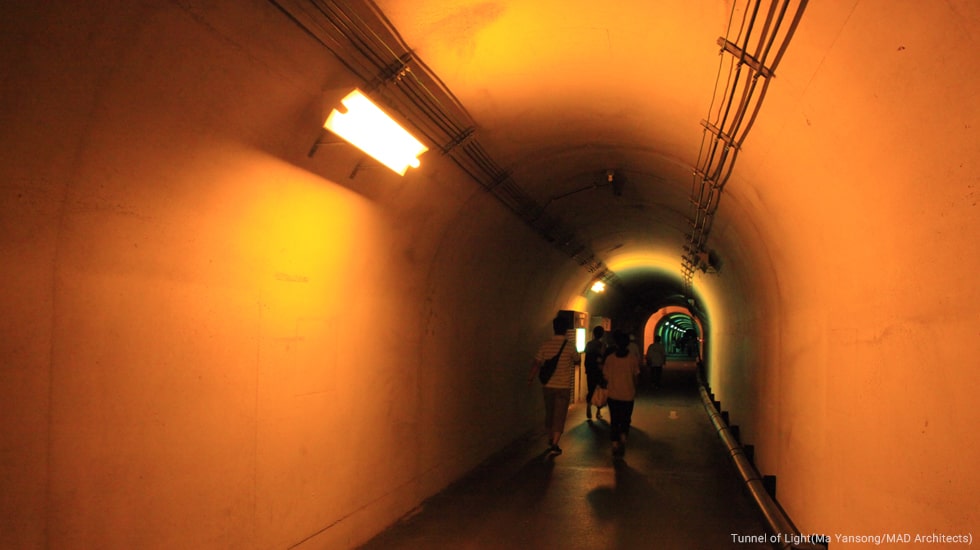 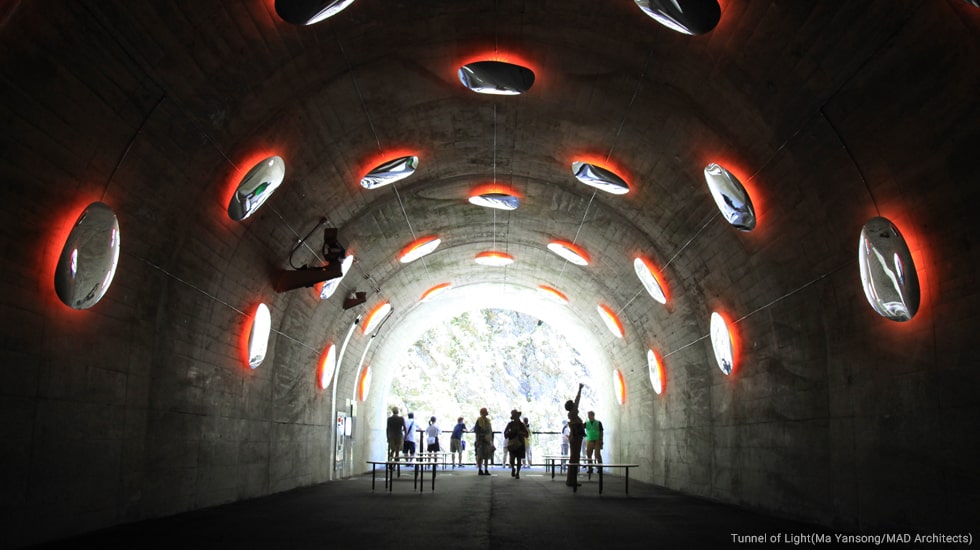 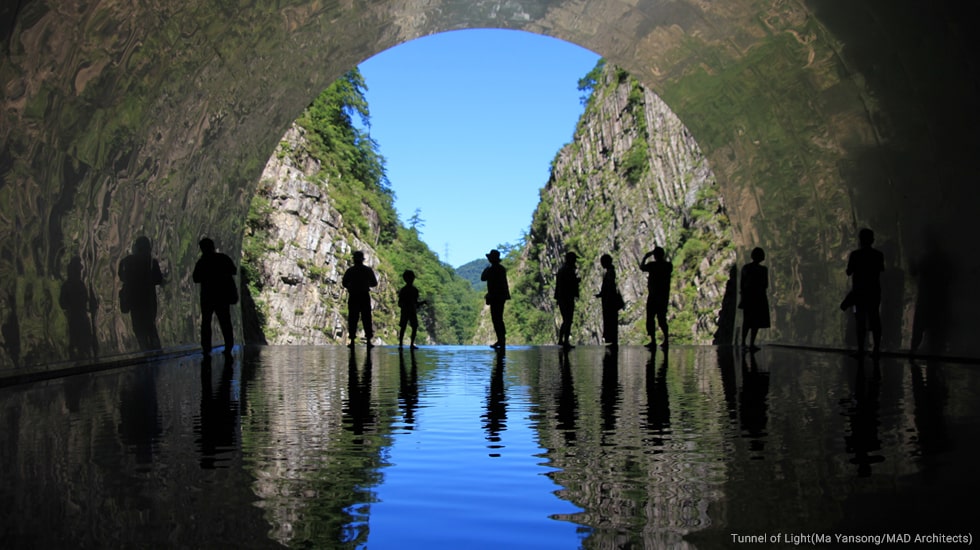 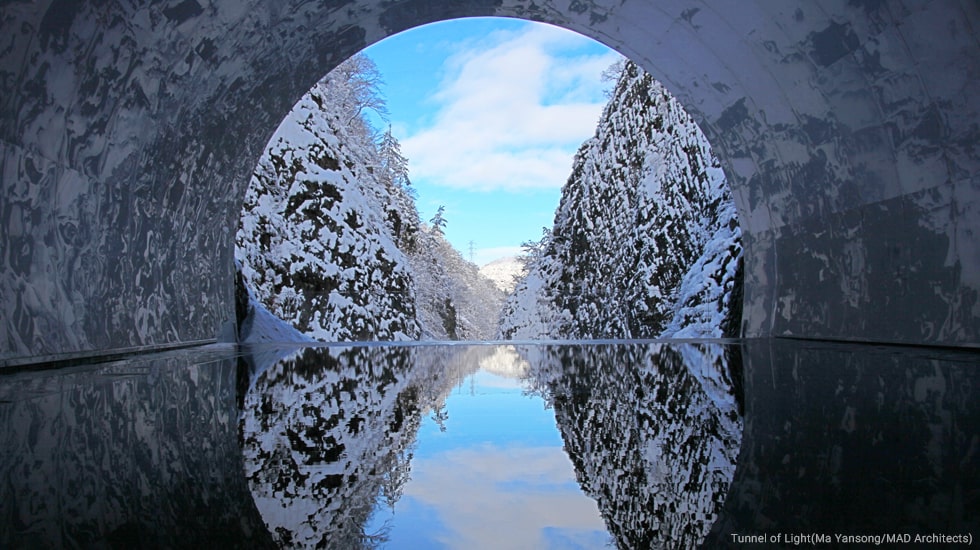 ⅤA trail following the Kiyotsu River from Kiyotsukyo Onsen passing through Yagisawa made it possible for visitors to enter and travel through the gorge, but avalanches and lingering snows would block it in early spring, and large and small falling rocks as well as landslides were frequent occurrences, making the path extremely dangerous.

In July 1988, falling rocks struck a man on the head, resulting in his death.
Thereafter, it was determined that safe passage could not be guaranteed to visitors and usage of the trail, and consequently entry into the gorge, was prohibited without exception.
Accordingly, it became impossible to enter the depths of the gorge from the hot spring district and see the sheer cliffs found there, which boast the most spectacular and beautiful columnar jointing in the gorge.

Many locals and visiting tourists requested that it be made possible for them to view the gorge’s beauty, and the Environment Agency (in charge of National Parks), the Agency for Cultural Affairs (in charge of Natural Monuments), the Niigata Prefectural government, Nakasato Village (now a part of Tokamachi City), and other relevant agencies began investing the matter.

The following determinations were made:

For the first time in eight years, people were again able to see the gorge’s beauty, albeit only a part of it. The trailalong the river remains closed to this day.

There is now, the tunnel makes it possible for visitors to safely enjoy the gorge without worrying about what’s above (the weather and falling rocks), or what’s below (steps, uneven terrain, etc.).

The tunnel is also open to stroller and wheelchair users. Because of these reasons, the tunnel has been particularly praised by group tour operators and families with small children or senior members, etc. who are not able to walk a rough nature trail. In addition, people are beginning to realize that, thanks to the tunnel, this is one of only a very few places where you can easily enjoy deep mountain snowscapes in the middle of winter.

Children under 5 and persons with a physical disability Free

There are two restrooms that also serve as works of art in the second viewing location. Please also use the public restrooms in the No. 1 Parking Lot.